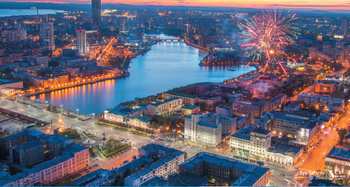 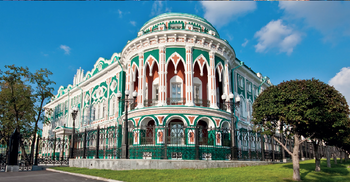 Ekaterinburg is the fourth largest city in Russia with 1.5 million inhabitants, and the administrative centre of the Sverdlovsk Region. It is located on the Iset River east of the Ural Mountains, in the middle of the Eurasian continent, on the border of Europe and Asia. It is the main cultural and industrial center of the region, also called the capital of the Urals.

Ekaterinburg was founded in 1723 as a fortress and factory town and named after Russian Emperor Peter the Great's wife, Empress Catherine I. Throughout its history, it has seen the rise of mining and manufacturing industries, death of the last Russian Emperor Nicholas II, name change to Sverdlovsk and back again, evacuation of whole industrial plants from western parts of Russian during World War II, start of the career of the first Russian President Boris Yeltsin, and rapid growth as a transport and business hub in recent history.

Now it is one of the most important industrial, business, science, and trade centres in Russia. It hosts large fairs, congresses, summits, as well as numerous cultural events and festivals. In 2018, the city hosted FIFA World Cup Russia games.

Modern Ekaterinburg has something for everyone:

Watch the videos to know more about Ekaterinburg and the Ural region!