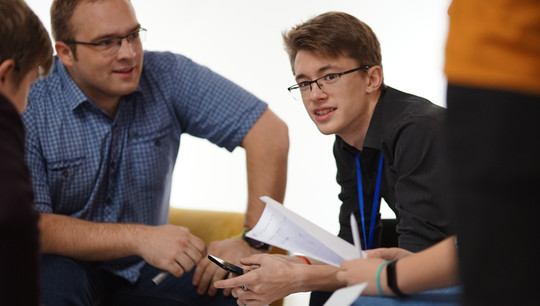 Ural Federal gets included in the 401-500 group of the Times Higher Education World Ranking on the cubject of Business & Economics. Photo: Pavel Elfimov.

For the first time ever, the Ural Federal gets included in the 401-500 group of the Times Higher Education World Ranking on the cubject of Business and Economics, published today.

Rector Viktor Koksharov is sure that attracting prominent young researchers from abroad, selective support of young researchers and economists and ensuring their cooperation for conducting joint research led by leading scientists of the university - all of this played huge a role in the outcomes done by ranking experts.

“We should add to it our scholars publishing their research projects and articles in journals indexed in international databases,” Rector Koksharov emphasizes. “And also the introduction of new educational opportunities and the widest educational tools: for example, two-degree programs with leading world business schools.”

The success of economists in the ranking is not due accident, yet, it is the result of their systemic approach to doing thier job. That is what Director of the Graduate School of Economics and Management of UrFU told us.

“Success' main components, on the one hand, are the identification of competitive advantages and the creation of the most favored nation treatment for researchers and teachers of the institute, and on the other, the effective use of the opportunities of international collaborations to present our research to the world community,” says Dmitry Tolmachev, Director of GSEM.

There are no little pieces to this work, he adds.

“Everything is important: both a thorough assessment of the level of international conferences in which the institute’s researchers participate, and a system of international workshops that allows you to establish personal contacts, and cooperation with major international research associations in the field of economics that helps build networking,” D. Tolmachev notes.

The THE Business & Economics ranking gives insight on university success in three general areas of expertise: business and management, accounting and finance, and economics and econometrics. When conducting the rating, 13 indicators are taken into account, of which the greatest weight is given to indicators of scientific and teaching reputation, as well as the amount of citation of scientific publications of the university.

THE World University Rankings is a global evaluation study of the best higher education institutions in the world, compiled according to the method of the British journal Times Higher Education (THE) with the participation of the Thomson Reuters information group. It is considered one of the most influential and valued global university rankings.

Ural Federal University is one of the leading universities in Russia founded in 1920. UrFU is located in Yekaterinburg, the capital of the Ural region, an economic, industrial, scientific and cultural center of Russia. The university is the project office of the Ural Interregional Research and Education Center "Advanced Industrial Technologies and Materials" designed for solving tasks of "Science" National Project.